The most basic way to create a custom autoshape is to combine two or more built-in autoshapes using the Group function, as shown in the image below. As you can see, the two autoshapes can have different formatting. It is easiest to apply the formatting to each autoshape individually before grouping them together.

One downside to this type of custom autoshape is the autoshape sizing. For example, if "Heading" was changed to "Really Long Heading", the text would not it in the top section. Resizing the autoshape to get the text to fit would result in both the top and bottom sections being re-sized. So the best way would be to Ungroup the shapes, re-size, and then Regroup the shapes.

You're not limited to creating text based shape, either. The shape below is a composite of a circle, 2 lines, 2 rectangles, and an arc to form a valve.

This article was written way back in the days of Excel 2003. Excel 2007 introduced some rectangle shapes with clipped corners, making the example below a poor choice, but the principles described in this section are still relevant.

There are many common symbols that are not included in Excel's default set of autoshapes. After all, drawing is a side benefit of Excel, not its main purpose. For example, the Loop Limit symbol (below, right) is used for procedural programming flowcharts. To create this autoshape, you can simply draw a series of line segments, as show in the picture on the left. Note that the sides were created using 2 segments per side to give connection points at the desired locations.

Again, this article was written back in the days of Excel 2003. Newer versions of Excel make it easy to insert Pictures (via the Insert tab), and the resulting picture object can be used inline with other shapes very easily. In short, if you use a newer version of Excel, you can skip this section.

The next type of custom autoshape is created by embedding pictures in autoshapes, as shown below. The simplistic flowchart below shows a lathe, a drill press, and a grinder. You could easily rearrange the symbols so that the process flow roughly matched the shop floor layout. And, of course, the pictures don't have to be machines. You could easily add staff photos and remove the border lines to give your process flows a friendly face, so to speak.

The windows for adding a picture to an autoshape is deeply hidden in Excel 2003 and previous. To access it, add an autoshape (e.g., a rectangle) to the spreadsheet then double-click on the edge of it to bring up the autoshape formatting window. On the Colors and Lines tab, click the Fill Color dropdown and select Fill effects as show below. 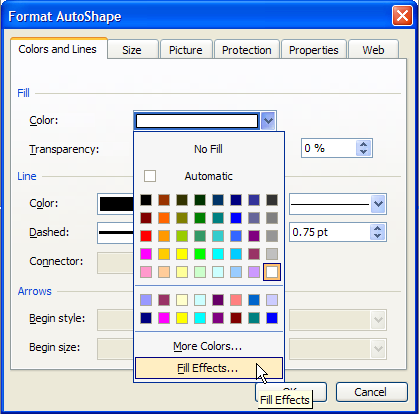 This will open up the Fill effects window. Select the Picture tab, and then click the Select Picture button to browse for the file. After selecting the file, click OK and you're done. 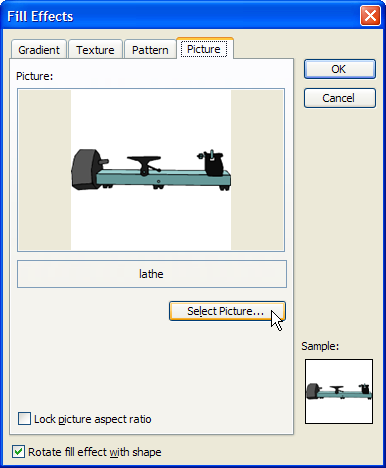 The advantages of putting the pictures into autoshapes instead of just putting them on the drawing are two-fold. First, the autoshapes allow you to attach Connectors to them. Connectors are lines that stay connected (as the name implies) to the shape even when you move it around. This makes it much easier to rearrange or edit your flowchart. Second, it's possible to add text to an autoshape, so you can create annotated pictures.


Bonus Tip #1: How to Add Extra Connection Points to Autoshapes

Have you ever wanted more connection points on an autoshape? An easy trick is to draw a line along an edge of an auto shape, starting and ending at 2 places where you'd like connection points to be. Then Group the line and the shape together. The example below shows a Process symbol with a line segment added to its top edge. This gives it 2 extra connection points that arrow Connectors will snap and connect to. 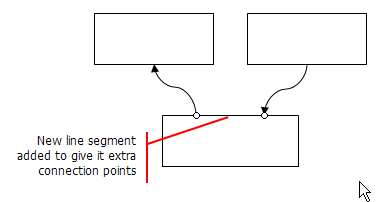 Since the time that this was written, experience has taught me not to use this approach. Instead I would recommend one of these approaches:

One drawing feature lacking in Excel is the capability to do crossover lines. Crossover lines (also called bridges) allow you to distinguish between 2 intersecting lines. But you can create a crossover line using an Arc and 2 Connectors. Getting the Arc adjusted properly can be tricky, but you can just download the "Custom Autoshapes.xls" file attached to this article and copy the crossover line in it.

To use the crossover line from the Custom AutoShapes sample file (see the download link at the top of the article), click on the left line segment and drag the little circle at the end of it over to connect to the first shape you want to join. Next, click on the arrow connector and drag the arrow end to the second shape you want to join. Then, click on the little crossover bump and drag it into position over the line you are intersecting. If the bump appears behind the other line, then right-click on it and Select Order > Bring to Front.