Note: We Have Moved from Blogging to Writing Technical Articles

Instead of blogging, we have switched to writing technical articles on topics related to our products.
Click here to see our full article listing.

For the past few years I've been running surveys to see what version of Microsoft Excel people are running (and by extension, which version of Office). Before getting to the latest data, the standard disclaimer applies: this polling data is not scientific. The sample sizes are decent but the user base is skewed. The data is collected from FlowBreeze trial users, which tend to be business-oriented users, and of those, only a small percentage are polled. Also, FlowBreeze runs on Excel 2000 through 2007 on Windows only. So Mac users and Office 97 hold-outs are not represented, nor are users of Open Office and online spreadsheets.

So with that out of the way, let's get to the data. The graph below of the last six months of 2009 shows that Excel 2007 makes up half the user base. The other half are holding out because they hate the ribbon. (Ha ha, just kidding!) 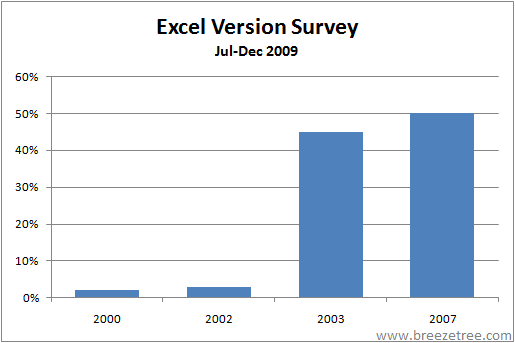 What's striking about the most recent trend is the drop off of Excel 2000 and 2002 (XP). In the last two years, they fell from a combined 20% of users to less than 5% , and a big portion of that drop off was in the last six months. On the eve of Excel 2007's release, Martin Green did a survey that showed Excel 2003 with just over 50% of the market, with Excel 2000 and XP making up most of the remainder. The early 2008 data points below show that Excel 2003 held the same market share after Excel 2007's release, indicating that XL 2007 adopters had leapfrogged versions. 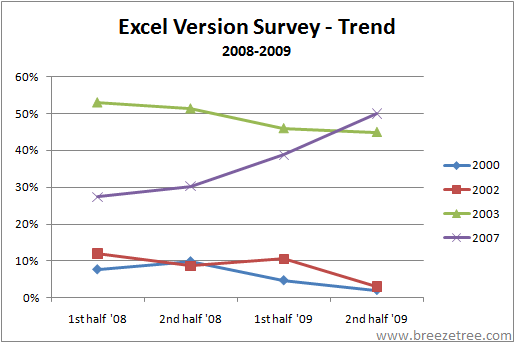 If history is a guide, after Excel 2010 is released a small portion of adopters will be Excel 2000 and XP users upgrading older PC's, another small portion will be Excel 2007 users who like to stay on the cutting edge, but the majority should be Excel 2003 users leapfrogging versions. I say "should" because it's hard to make a prediction. On one hand, Excel 2003 is still a great piece of software, it doesn't look dated, and a lot of people do not like the ribbon. On the other hand, users of older versions will face increasing pressure to be able to read the new file formats (esp. those w/o the Office 2007 compatibility pack). I wouldn't be surprised if Excel 2010 had a slow adoption rate, but it will be interesting to see.