Note: We Have Moved from Blogging to Writing Technical Articles

Instead of blogging, we have switched to writing technical articles on topics related to our products.
Click here to see our full article listing.

Time for a periodic update to the BreezeTree Excel version survey. The numbers are below and speak for themselves. The survey data was collected over the last six months, and the target audience was business users. Standard disclaimer: This is not a scientific poll - but without Microsoft publishing these numbers, it's probably as good as any other estimate. 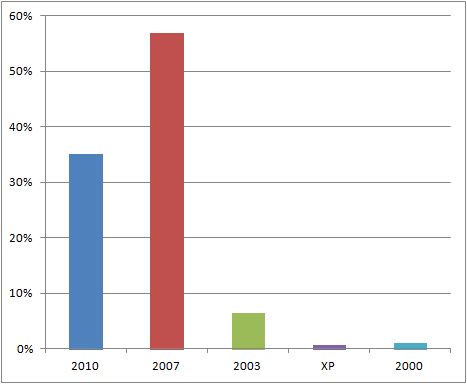 The data is below. The percentages are based on 1587 data points (otherwise known as people).

For comparison, here is the data from the 2009 Excel version survey.

The latest survey shows that Excel 2010 adoption has grown rapidly and 2007 usage has continued to grow (it has probably peaked by now). Meanwhile Excel 2003 usage has fallen dramatically, and Excel 2000 and 2002 (aka, XP) are looking rusty around the bits.

Another way of looking at the data: