How the Inconsistent Formula Audit Works

The R1C1 format is useful when comparing formulas because the relative cell references make it possible to detect when the same formula has been applied throughout a range. For example, here is a row of formulas that sum the first 5 rows in their column:

Displaying them again in their R1C1 format, it is easy to see that the exact same formula is being used in all 5 cells:

The Inconsistent Formulas tools look for patterns where the R1C1 formulas do not match along a row or down a column. 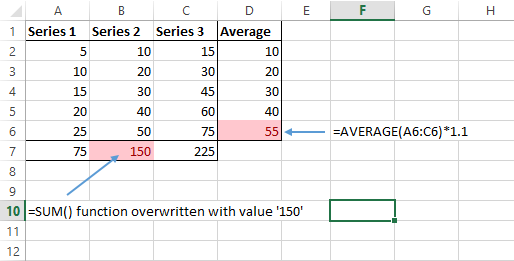 The first type of anomaly is when two or more formulas change in a row or column. In the image below, the middle cell has an altered formula, so Excel flags it with an error notification:

However, if two cells have an altered formula, Excel will no longer flag them with the error notification:

Running the Flag Inconsistent Formulas tool, Spreadspeed will mark the cells in the region with the Check Cell style, as shown below, to indicate that there may be a problem in the region.

In the next example, we see another row of cells with no Excel error notification:

Again, running the Flag Inconsistent Formulas tool will mark the cells in the region with the Check Cell style, as shown below. In this case, the different formula may be intentional, which is why Spreadspeed marks the region as Check Cell instead of marking it as Bad.

(The tools on this page are just a small fraction of the Spreadspeed formula auditing toolset. The Precedents / Dependents Navigator, Visual Audit tools, and Audit Reports are also excellent for finding potential problems in both simplex calculations and complex models.)